Halloween is a very, very close second runner up to Christmas for my favorite holiday. In fact, the two of them are neck and neck, with Christmas barely winning by a nose. So of course we love to decorate for Halloween. I was excited to get out our decorations this year and have an entirely new place to try to find spots for the old items. And so let me take you for a tour of Creepy-Corner Cottage.

The bay window in the living room was a great place to hang this banner and set of paper lanterns. A piece of fabric from JoAnns we found a few years back and couldn't resist covers the plant stand. 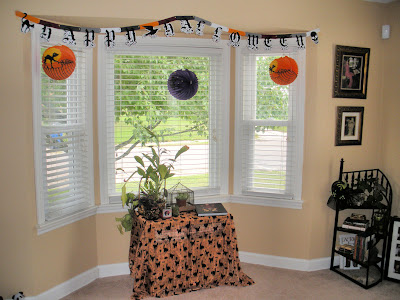 This is a new addition to the house. The empty space above our tv in the living room has been bothering me, and I decided to do a grid of four photo frames on the wall behind it.

The speakers get tricked out for Halloween, wearing masks, and our color-change ghost, Lucius, sits on top of the base. The regular wrought iron candle holders on the coffee table get switched out for a ghost and witch hat. 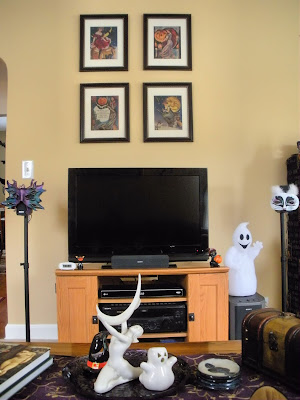 The frames above the television set have open backs, so it will be relatively easy to switch out the images in the 8x10 openings by season or by whatever we'd like. I have a collection of saved geekdom-themed "Keep Calm" images we might put in these frames when it's not a holiday season. But for now, we proudly display a few antique Halloween postcard images. Have I mentioned yet that my favorite Halloween style is retro early 1900s? 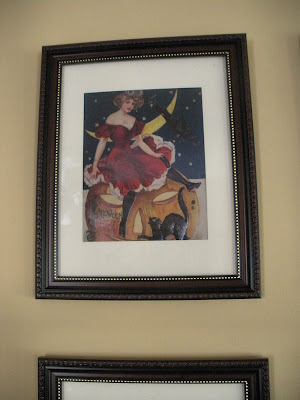 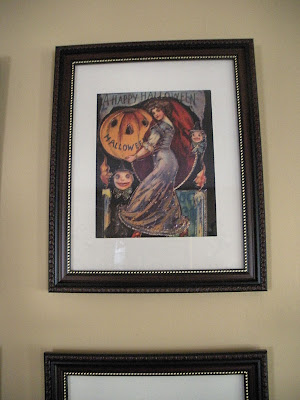 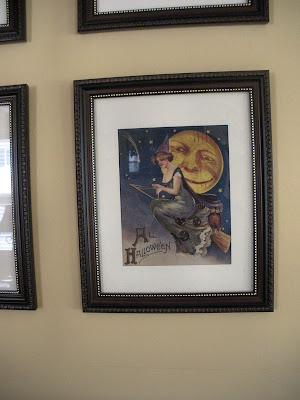 The mid-century modern black cat a friend gave us joins the trickster fun. 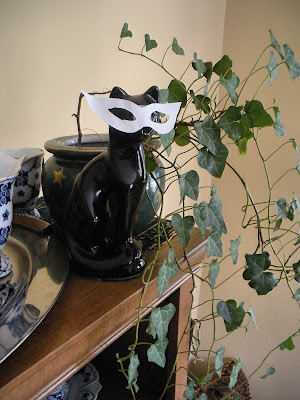 And silhouettes of witches fly in our living room lamp. 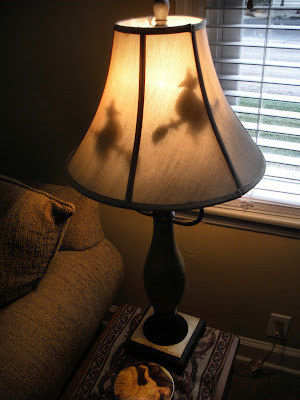 The mantel was quite fun to decorate this year. We had a fireplace at our apartment, but there was no mantle above it, and I never had a real chance to change out displays. 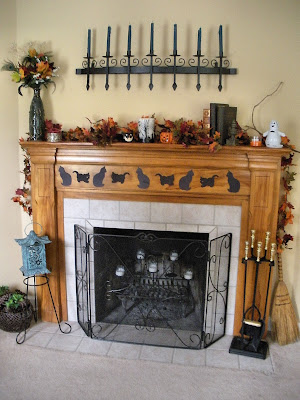 The center candle holder is especially lovely when it is lit and the silhouettes glow. 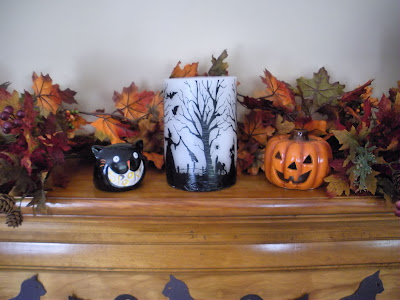 A visiting witch left her hat perched on the velvet chair in the corner. 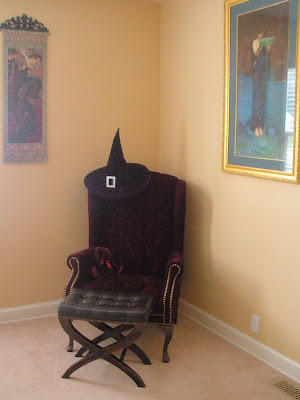 The entryway. I still have plans to give our House Spirit on the wall a holiday mask, and I also hope I have time this year to try a Martha Stewart craft of cutting out and adhering a chiffon ghost to the mirror glass (with removable rubber cement dots) 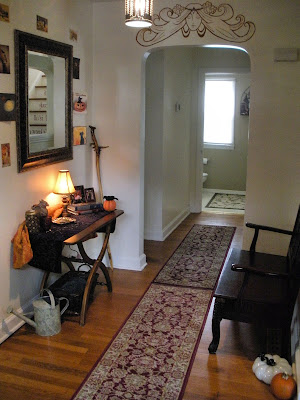 The entry from the opposite side. Old favorite Halloween cards and vintage reproduction postcards circle the mirror, along with a couple of shots taken of me at a recent eerie photo shoot. 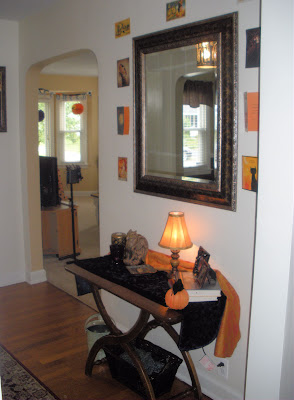 A glass pumpkin from the always-amazing Home Goods sits on the entry floor next to the hall bench, and a small cooking pumpkin. We always put a crow on top of a baking pumpkin every year, but this year the crow found a new home you'll see below. Time to buy another! 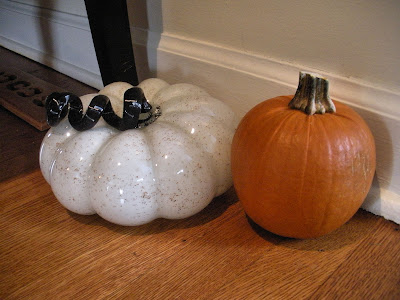 The dining room, so sad and blank still awaiting its enormous transformation, was the perfect backdrop for the bat silhouettes I cut out years ago for the huge stairwell wall at our apartment. (There are several more up, but I couldn't capture them all in one photo) 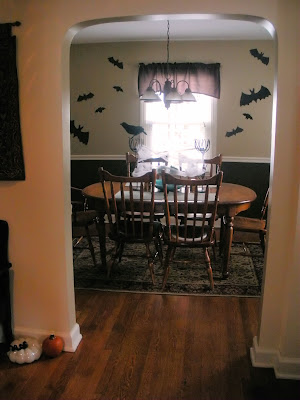 The crow looks so fun perched on the wrought iron candleholders on the dinner table, I had to leave him there. A spiderweb spun itself between the candles and the dried hydrangea. 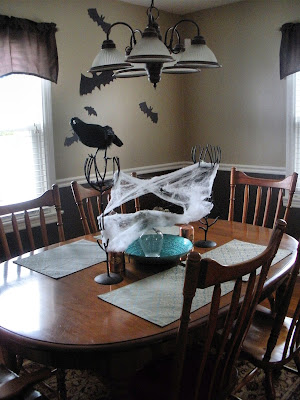 I mentioned to my friend Dave that we had put up our Halloween decorations yesterday, and he told me that his wife Chris had something for me that they would drop off today. Oh my gosh. Did they ever!!! Chris apparently found a kit last year for a beaded cross stitch artwork, and made it for me. 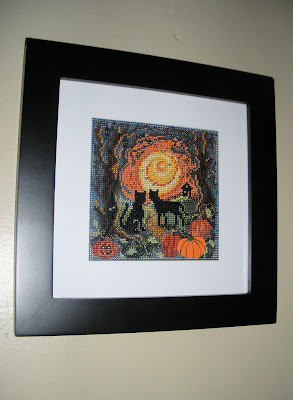 It's hard to see all the beadwork on this piece, but it is truly beautiful. I was giddy when I opened it!! I don't know that this piece is coming down after Halloween... 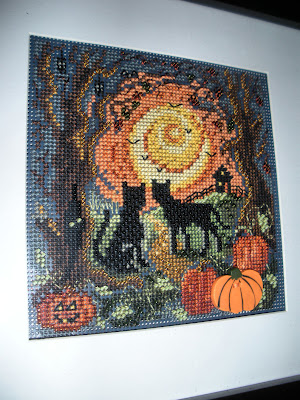 The front of the house didn't get ignored either. The window boxes I've been so obsessed with aren't here yet, but I did what I could with the front porch. 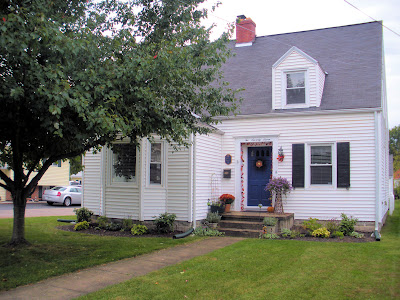 I knew I wanted to put up garland around the door frame for both Halloween and Christmas this year, but the frame is metal, and I didn't want to poke more holes in it. A very helpful blog pointed me in the direction of Command hooks, which we had used at the apartment for hanging our Christmas stockings. The little metal hook versions worked wonderfully for the garland, and the garland could be wired to the hooks for guaranteed stay-uppableness. We have plenty of garland left, and I'm thinking I might double the thickness around the door. We'll see, again, how I do on time. 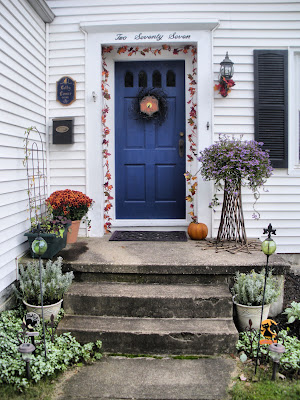 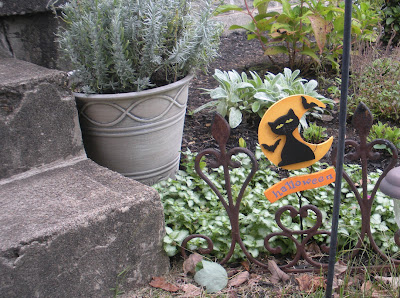 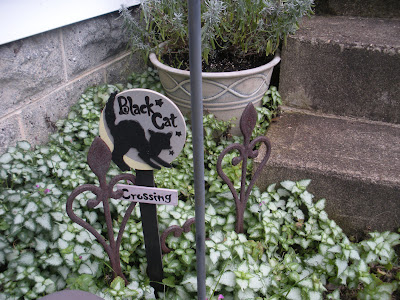 At last year's after Halloween clearance sales, I picked up a sign on super duper clearance (less than a dollar) I thought was adorable. I wasn't too keen on the writing on it though...it was a restaurant style sign that said "the taste will knock you out forever." Meh. So I painted over the whole thing, and created this new sign for the front door from scratch: 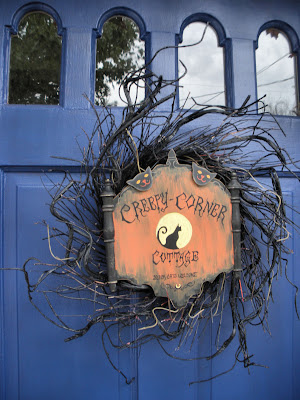 The wreath is one I picked up at a furniture warehouse a couple of months ago for $3. I saw it and immediately thought "Halloween." If you clicked the link above to see the spooky photo shoot I did recently, I wore it in my hair for that one, so it has definitely paid for itself already. 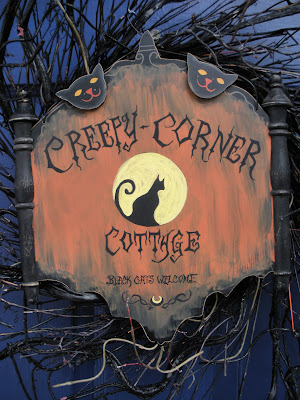 And that's the tour of Creepy-Corner Cottage! If there's one thing we discovered while putting up our Halloween decor this year, it is...WE NEED MORE. The quantity of decorations that were so abundant at our little 700 square foot apartment don't go nearly as far in the new house. Sadly, it seems like the stores have less and less good quality Halloween items at a good price, but we have our eyes on a few bargains to hunt for after the holiday this year.

Only one other major piece of news at the cottage. Something is missing in this photograph: 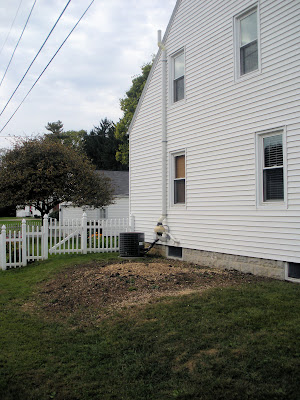 We used to have a blue spruce tree on the left side of our house that reached a little taller than the roofline. We suspect it might have been a previous owner's old Christmas tree. They planted it *way* too close to the house...it was touching the house in several places (up by our attic access too...can you say "come on in, mice and vermin?") and touching electrical wires on the other side. The roots were starting to nudge in to the basement, and a previous tenant's attempt to trim back the bottom of it had resulted in a sparse and hideously ugly two story tall Charlie Brown tree. It was beyond time to get it chopped down. So chop it we did. All the neighbors applauded (seriously..several have already told us how happy they are to see it gone) and we now have more space for me to play with landscaping. I'm already thinking holly bushes and a white arbor with wisteria....
Posted by Grace at 4:20 PM 2 comments:

I've been pretty busy lately with a bit of a mystery ailment. Hoping to get that sorted out soon when the results come back from the doctor's tests. Because of that, I haven't been doing much around the house to update. But I have made a few more silhouettes for my Etsy shop.

When I've made $300 on these, I plan to order my custom window boxes. And I'm very close to that goal! Here are a few more I've made:

Another Pushing Daisies silhouette, a little different than the one on our wall, titled "The Piemaker and the Dead Girl": 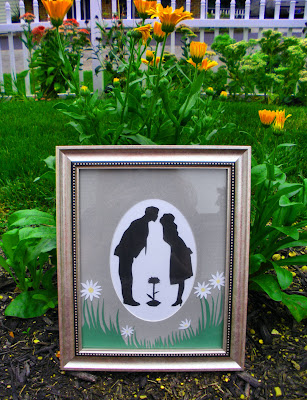 Doctor Who silhouette, titled "The Angels Have the Phone Box" 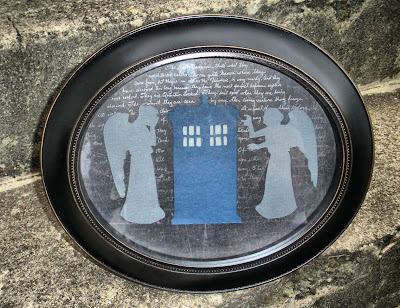 Another Who sihouette of the 10th Doctor and Rose, titled "Does it Need Saying?" 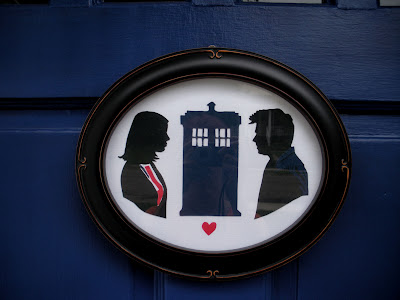 I'm having so much fun making these! I have an idea for another one for our own wall I hope to pursue soon, or next.
Posted by Grace at 11:07 PM 1 comment:

Another shot I very much like from Monday night's tea.