I've been pretty quiet here lately...no updates on Princesses for the dining room wall, or any other creative projects.  It's not that I haven't been working on anything...it's that I've been working on Tom's anniversary present for our five year anniversary!

The traditional five-year anniversary gift is wood, and I knew right away I wanted to paint something on wood, since I discovered a few years ago that it's an exceedingly pleasant medium for painting.  Our bedroom is themed to an enchanted woodland, with its tree bed, Windling Trees on the walls, and branches on the window tops.  We've been adding touches of enchanted forest creatures here and there, and I thought a triple hare would be the perfect thing to add above Tom's dresser.

The triple hare, or tinner's rabbits, is an ancient symbol of unknown origin and meaning.  They are found primarily in churches scattered throughout the area of Devon England, which coincidentally is where many of my favorite mythic artists and inspirational muses live.  However the design pre-dates these British church representations. 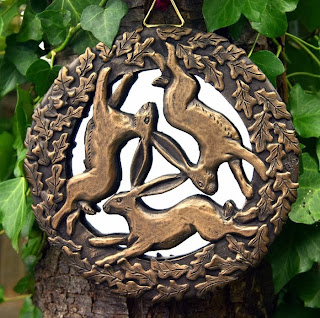 Personally I find the design beautiful, but I also thought it gave a marvelous opportunity to create a design celebrating the three individuals in our family unit: Tom, me, and our fur-kid Corvin.

The first step was to plot out a design on paper...the triple hare can be a tricky sort.


The next step was to get a sheet of plywood, and make the design fit on the plywood. 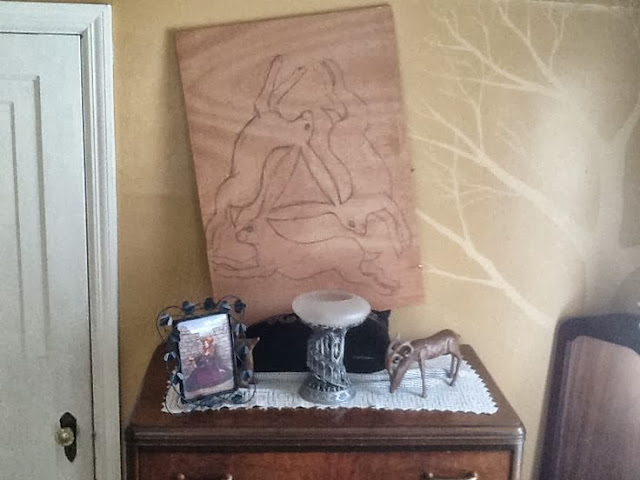 Next, I was inspired by the fantastically stunning work of Sylvan Hare Arts to cover my hares with ghosted symbols to represent the three individuals in our family unit.  I sketched out the symbols on a print-out of the design below: 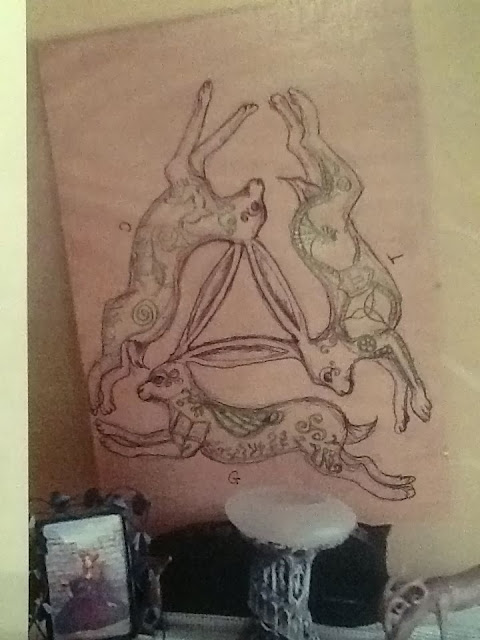 Now finally came the time to start painting the hares.  I started with the one to represent me, done in a gold-ginger color with brown eyes: 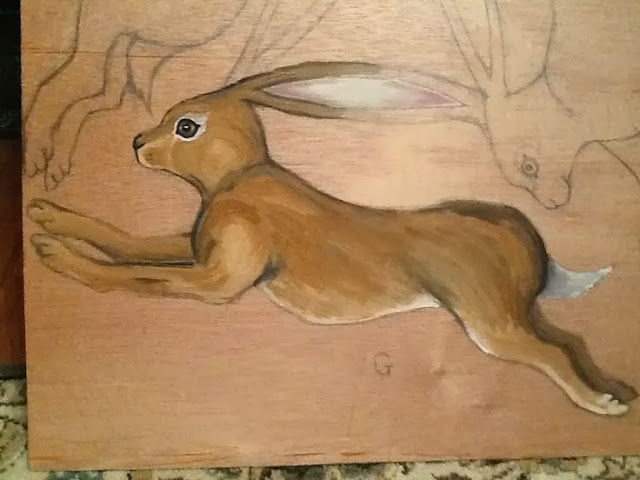 Then, using a white oil paint Sharpie (highly recommended, worked great) I sketched out the symbols on my hare: 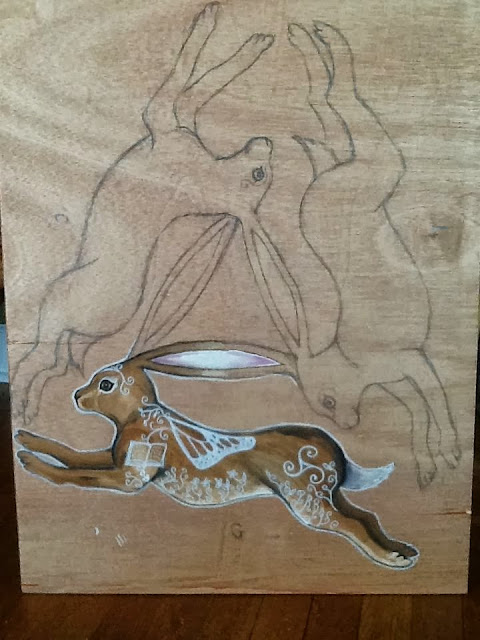 Next Tom's hare, in a dusky roan color with blue eyes, was painted: 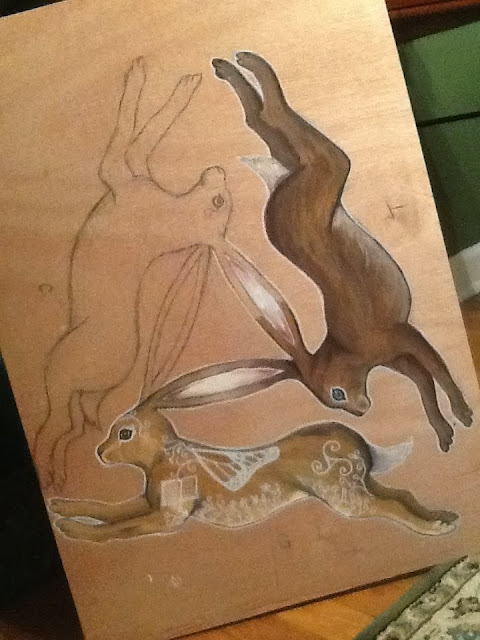 And the symbols layered on his: 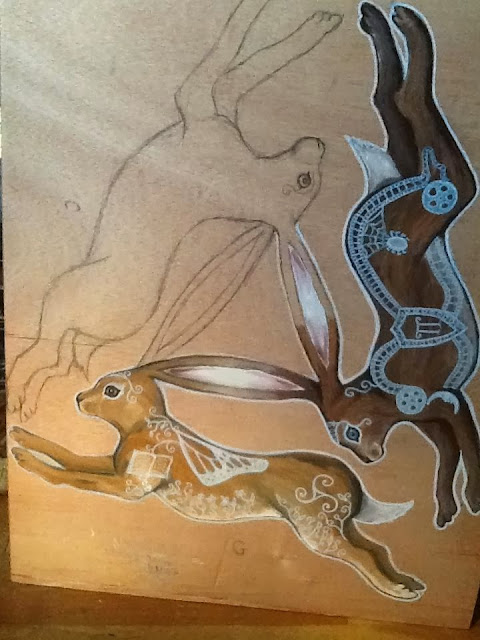 Finally Corvin's hare, in all its ebony glory with gold-green eyes, was painted: 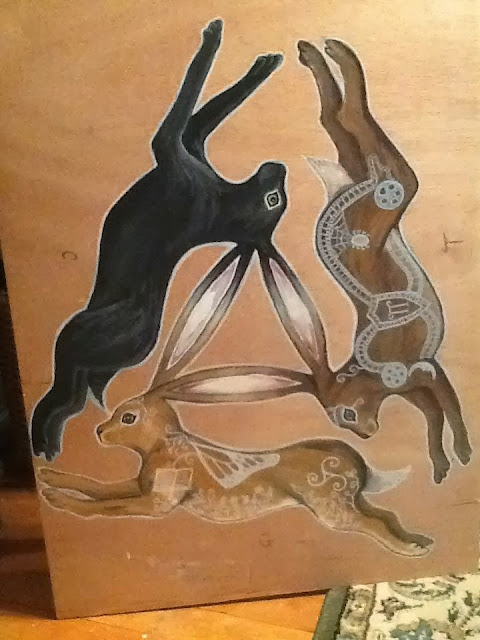 And the symbols added: 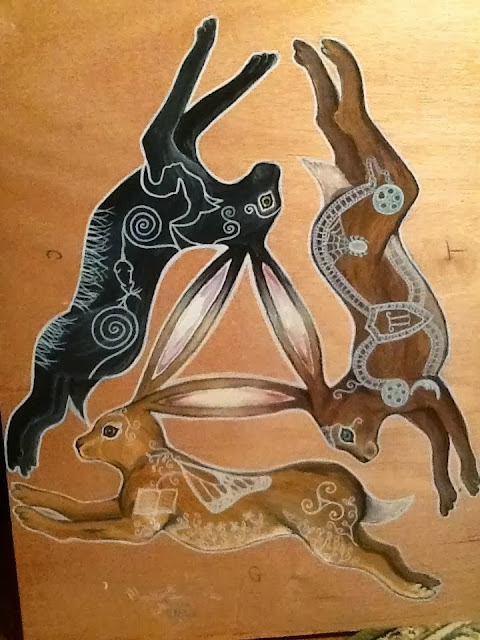 My symbols include butterfly faerie wings, an open book, a design of plants and flowers since I adore gardening, a triskelle, and the hidden initials "P.R.B." for the Pre-Raphaelite Brotherhood I love. 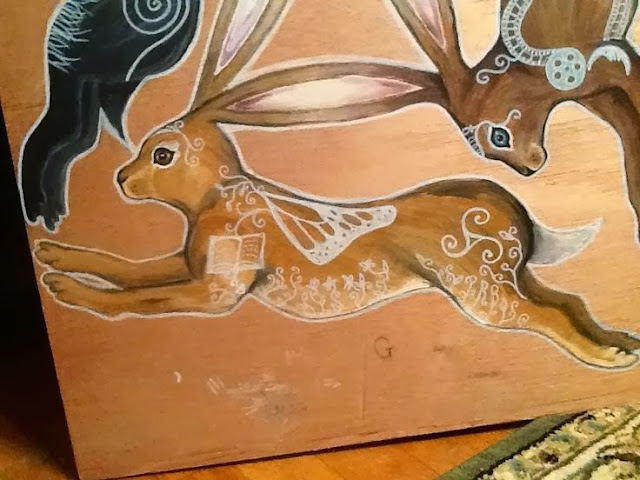 Corvin's symbols include a cat silhouette with a crow silhouette inside of it (Corvin was named for the crow he resembles), spirals to symbolize when he gets hyper and runs around the house, a toy mouse, and the grass he loves to jump down from the back porch to eat. 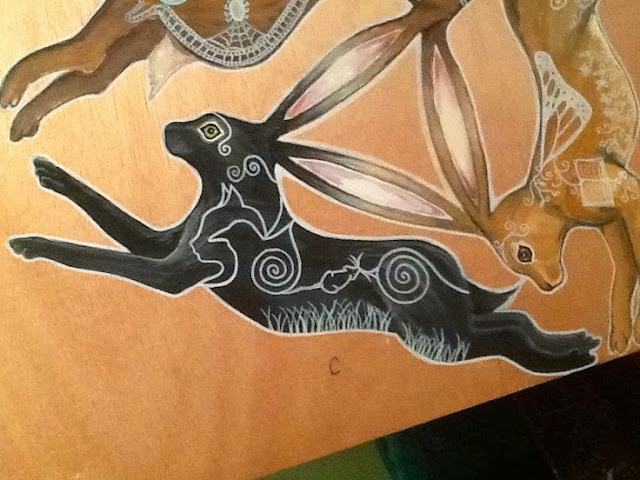 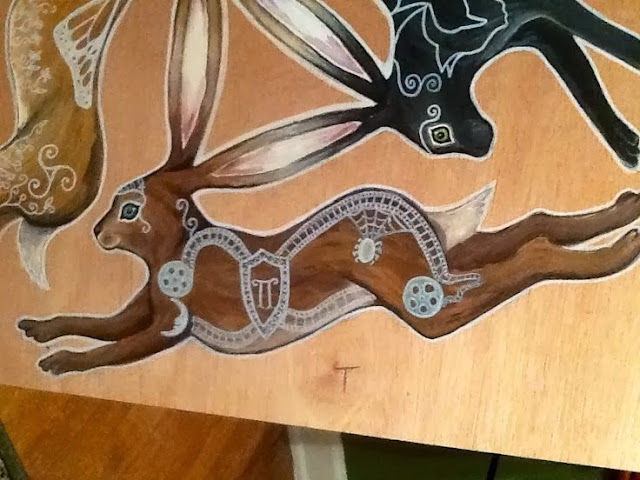 The final step was to get the whole thing cut out on a scroll saw by my exceedingly talented coworker John. 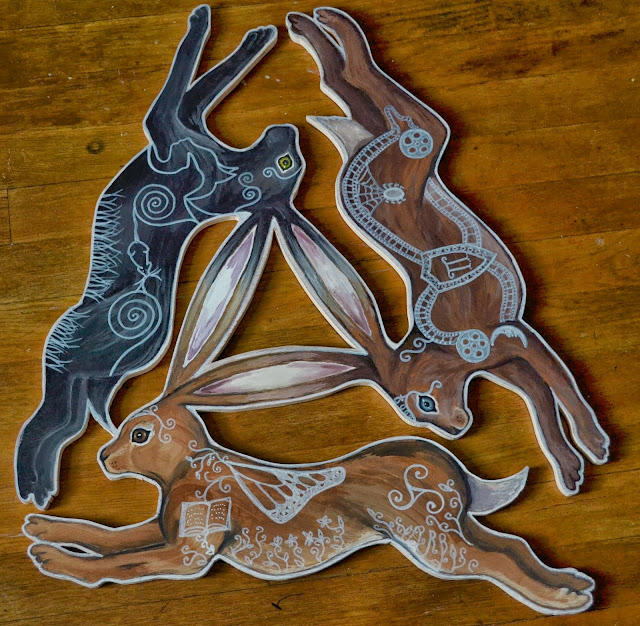 As a final touch, I wrote a short riddle-poem and added it to the back of the piece:

And there you have it!  We still need to hang the triple hare on the wall, but minus the pillow, this should be what it looks like when it's hung! 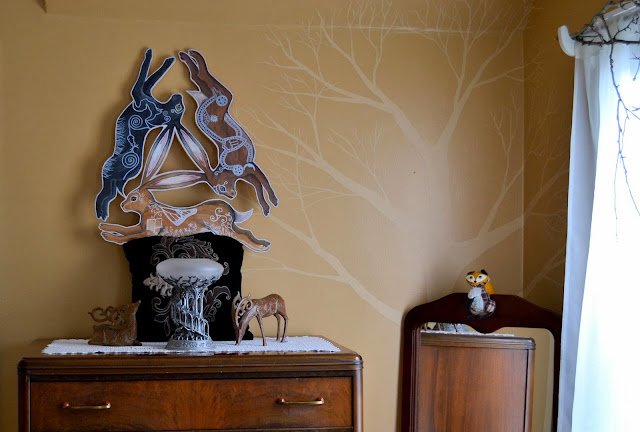 One last shot to give you an idea of the size: 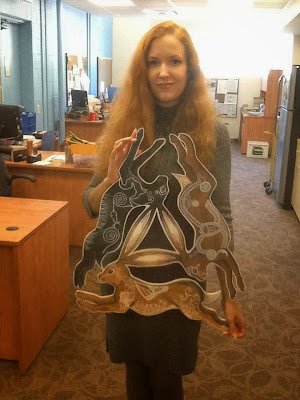 A friend told me yesterday about an area farm that sells dahlias to florists.  I asked if she knew of any local places that had "pick-your-own" flowers, and after she contacted the dahlia farm to ask, they mentioned that they were cutting down all the crop for the year tomorrow.  So...today we went and got literal bucketloads of gorgeous gorgeous dahlias, a dozen or more varieties. 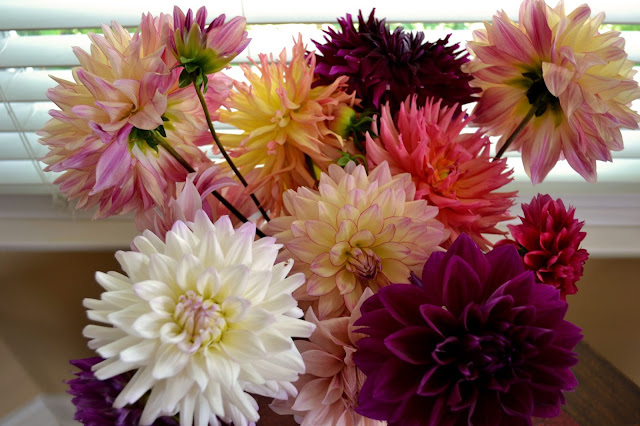 I had enough to make bouquets for every room in my parents' / grandma's home, and a nice size bouquet for our living room. 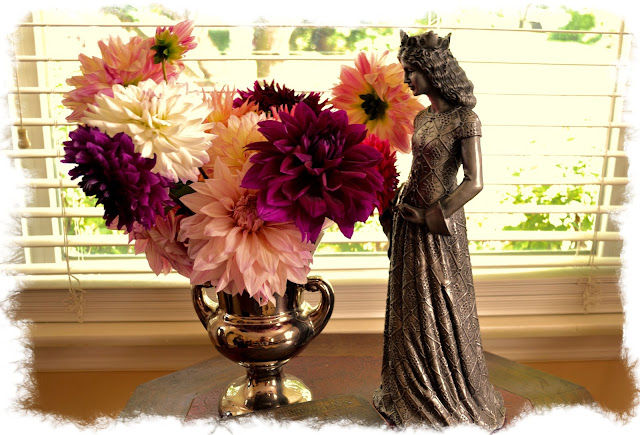 Of course a blog entry wouldn't be complete without a picture of Corvin. 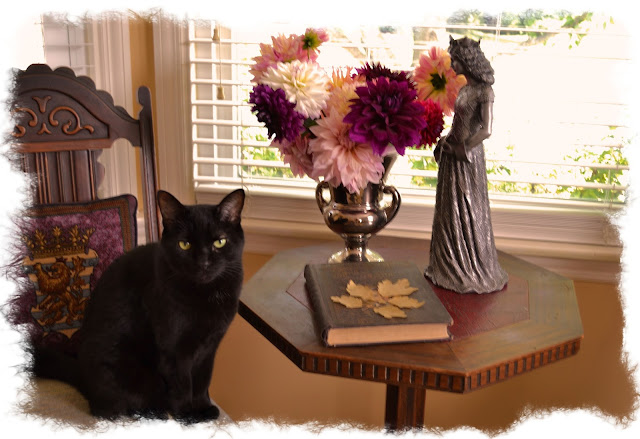 Yesterday I also gathered some sedum from my garden and brought it with me, along with an evening gown I found at Goodwill for a dollar, to a photo shoot with photographer Anna Inez on her tree swing.  She has sent one image from the shoot so far, and I absolutely love how very like a Victorian postcard it looks. 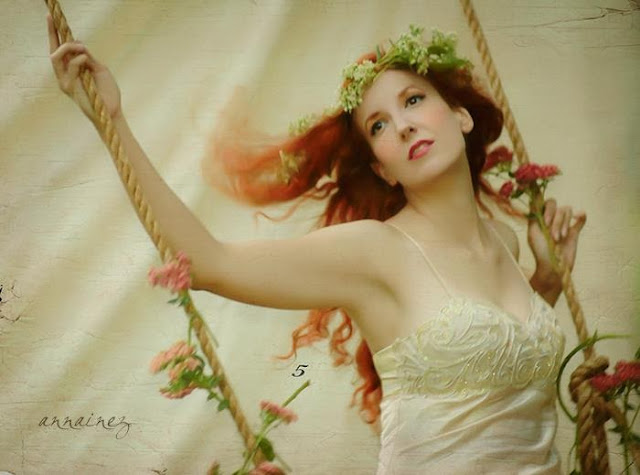 Hooray for flowers!
Posted by Grace at 9:18 PM 1 comment: