Princesses 3 and 4: Delphina and Julia

I couldn't resist buying sunflowers this morning from the grocery store for $3.50.  Aren't they cheery in the front window? 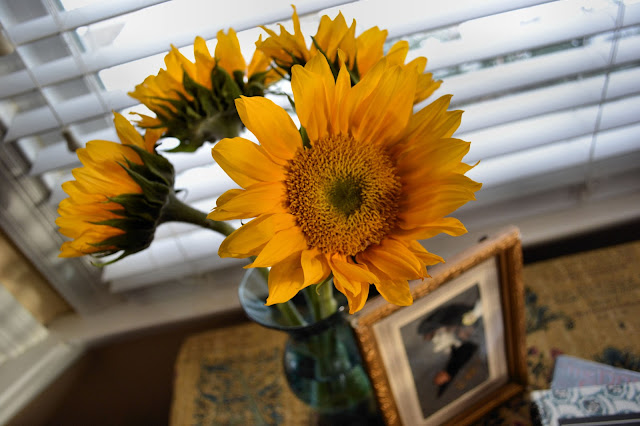 I also sat staring at a photo of the dining room last night, deliberating what all still should be done in there.  I think replacing the chandelier I've never liked will be my reward for getting all the princesses painted.  Meaning...it'll be a while, but at least it'll happen eventually ;)  But I also thought the tops of the corner cabinets could use "something."  I love the way dried sedum looks like miniature trees, and have used it in a craft in the past.  I think it looks nice among the trees painted on the walls. 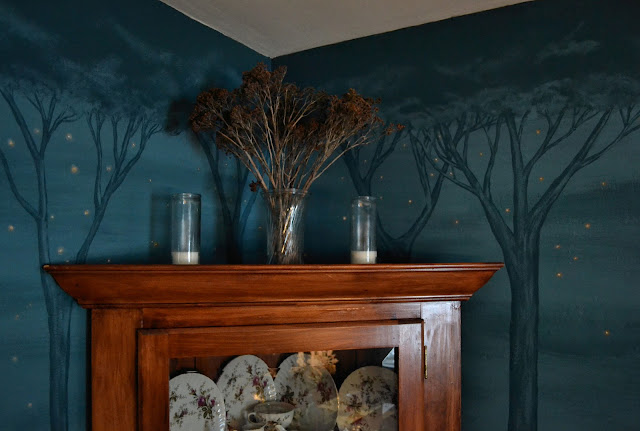 Oh yes, and then there's also this, the real reason for another blog post ;)  Two more princesses.

My goal for most weeks is going to be to complete 3 princesses.  I figure that way I can get the cut-outs done in four weeks.  But Princess Julia and Princess Delphina are twins, connected visually as well as at-heart, and I had to create them together.

I mean, think about it...Twelve Dancing Princesses...for it to work out logistically, you have to at LEAST have a pair or two of twins...

I completed the ladies while the sun was still up today, hence the better quality images! 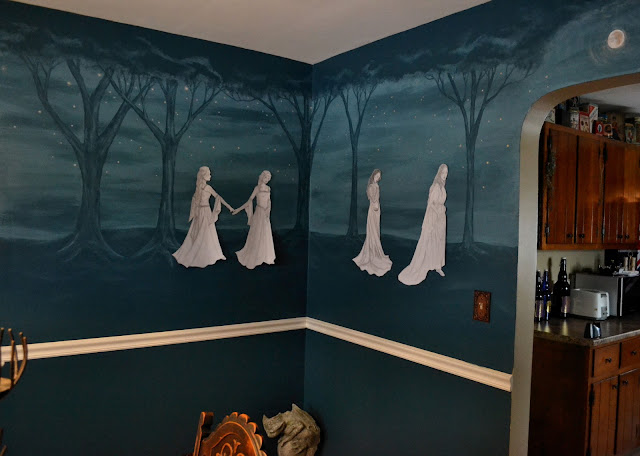 Yes, that is a Chimera photo-bomb.  He's tucked warmly in the dining room corner until the weather gets warm enough again not to damage him. 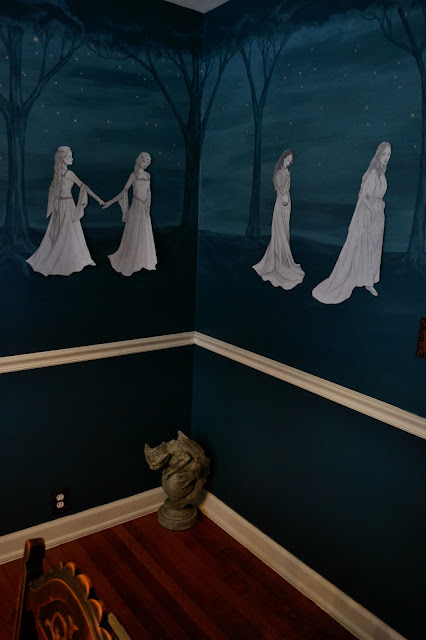 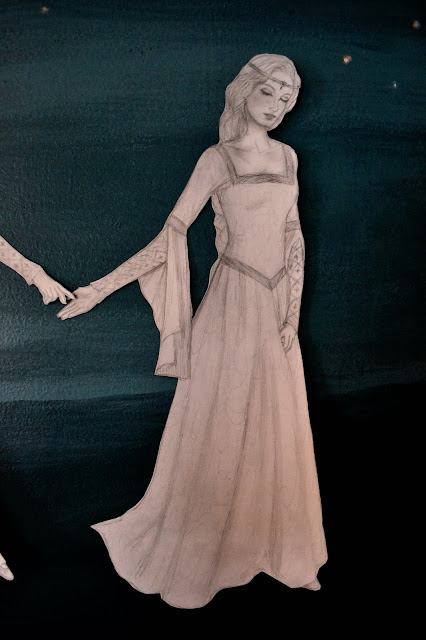 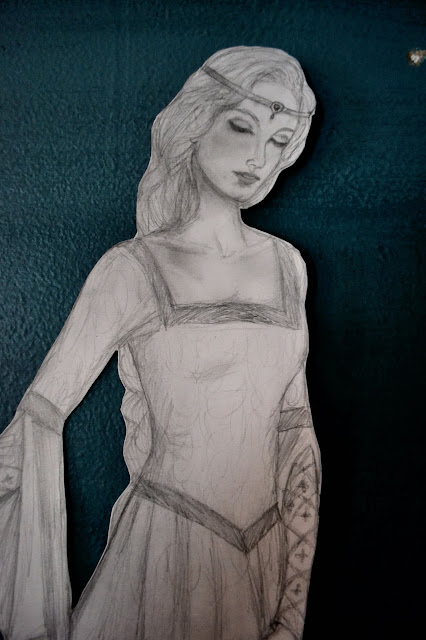 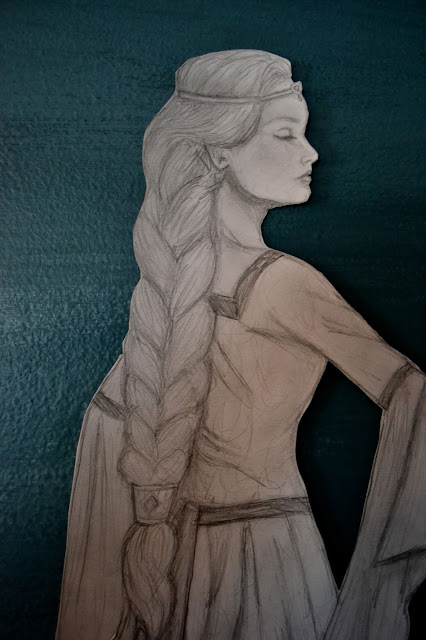 Even in their bespelled and sleepwalking state, they reach for each other. 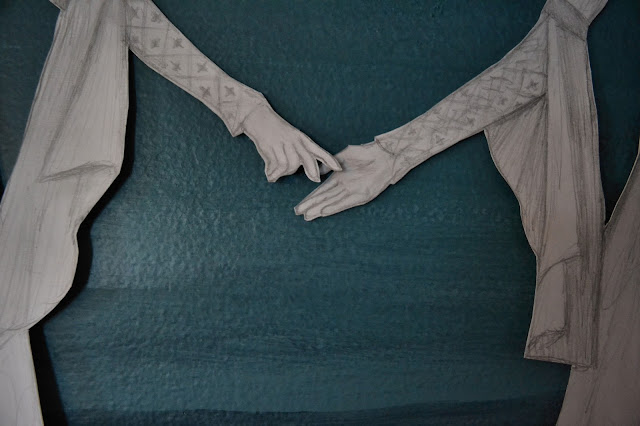 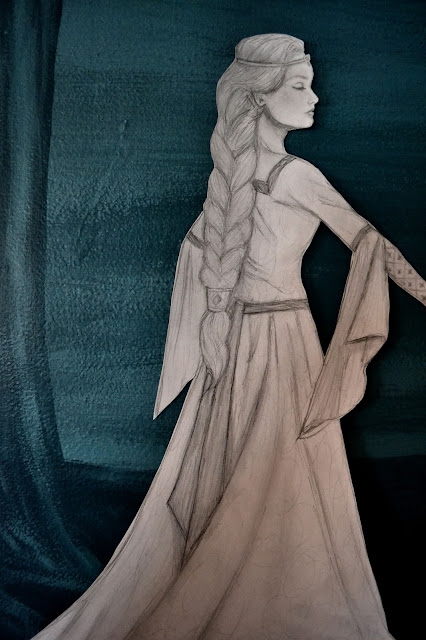 Finally, a shot of me with the four princesses so far. 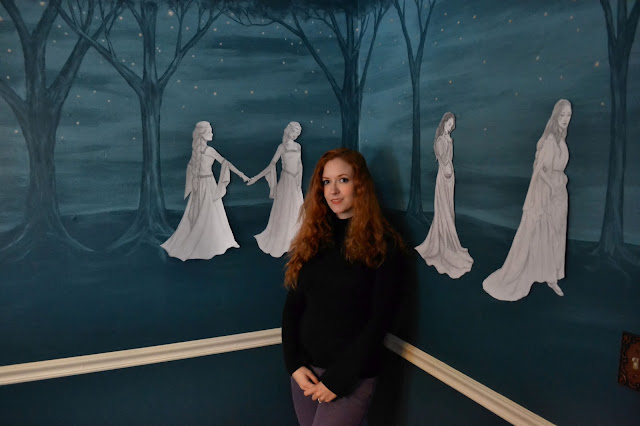 I'm really enjoying this project, far more than my fears whispered to me I would.  I hope this enjoyment lasts well into the painting stage as well.

Well the second princess is up on the wall.  At this rate I might get them all finished in ten years instead of a hundred.  ;)  As usual, click on pictures to see them much larger. 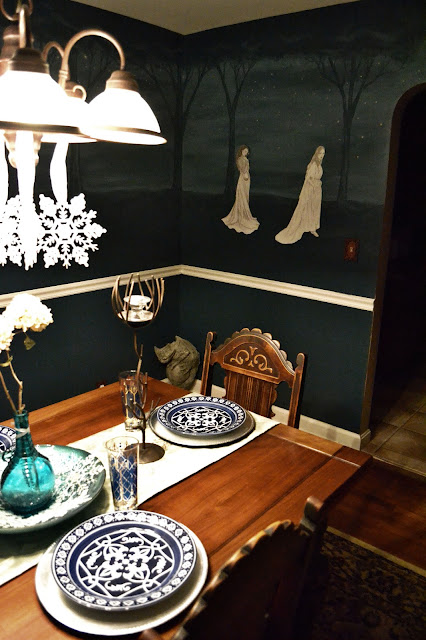 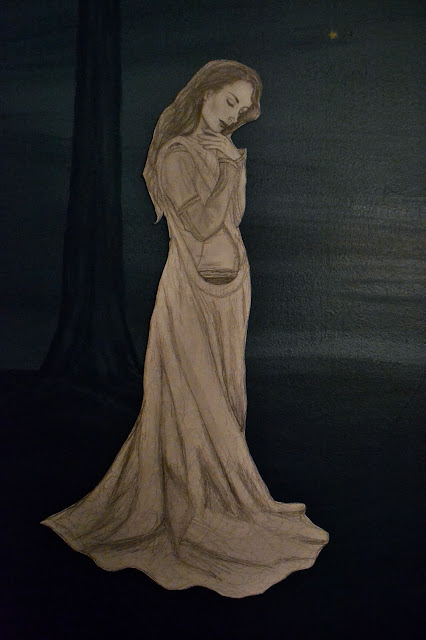 Another shot of the wall in context: 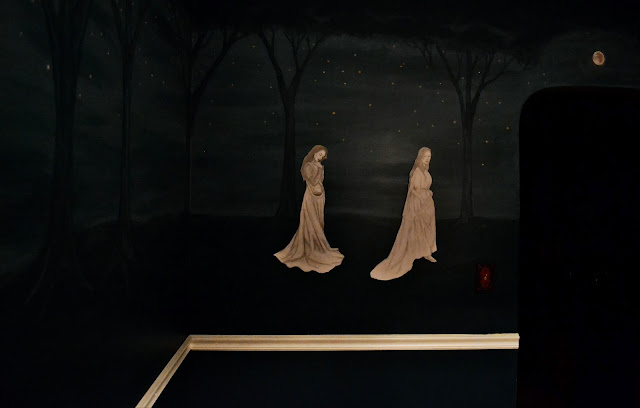 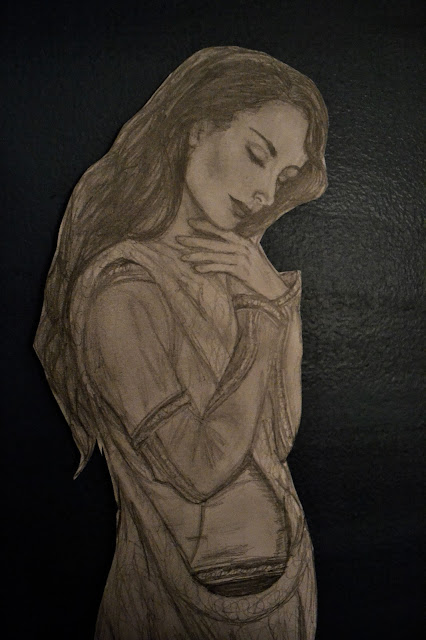 I hate taking photos with flash, but it gives a different look at the figures: 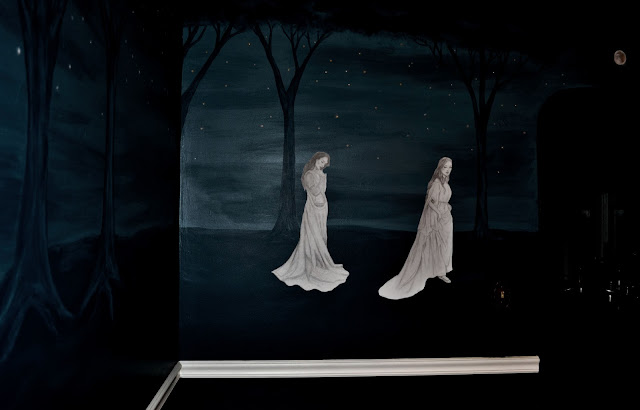 So how about it?  Do you want me to keep sharing progress as I complete each princess, or wait until I'm done with the templates for one big post?
Posted by Grace at 11:44 PM 3 comments:

My enjoyable day yesterday painting the Faerie Door in the Dreaming Room gave me the courage to grab the first of twelve sheets of white posterboard I bought months ago, attach it to the clips on the art board my friends Dave & Chris gave me for Christmas, and start sketching out the first princess for the wall of the dining room.

I'm still not entirely sure I have the courage to take this project to phase 2.  Phase 1 has just turned out nicer than the skeptic in me thought it would, and that same skeptic keeps whispering that if I try to paint twelve princesses sleepwalking through the forest, it'll just ruin the whole thing altogether when I botch it up or have to quit halfway through from utter exhaustion and "sick-of-working-on-this-for-ten-years"edness...  If I thought phase 1 took a long time, imagine how long phase 2 will take.

Well anyway, I figured there was no harm in drawing up the first princess, cutting her out, and placing her on the wall in the approximate spot I think she'd go.  If I AM ever going to paint all the princesses, I planned to do this anyway...draw them all out on posterboard, cut them out, and place them on the walls as if it was a giant Colorforms sheet until I figure out just where they look best.  Then and only then would I start the formidable task of actually painting them on the walls.

It's hard to get a sense of size when you look at this, since you have to remember that this mural goes around *the entire room.*  The princess is, from the top of her head to the train of her skirt, almost two feet tall. 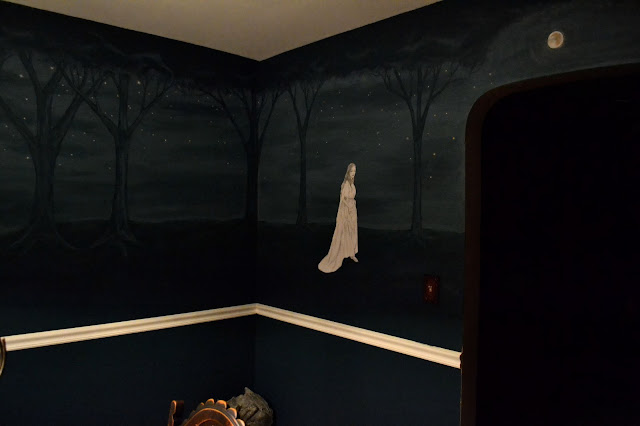 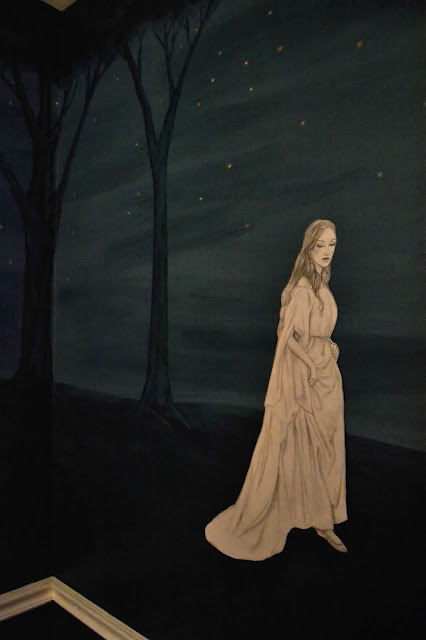 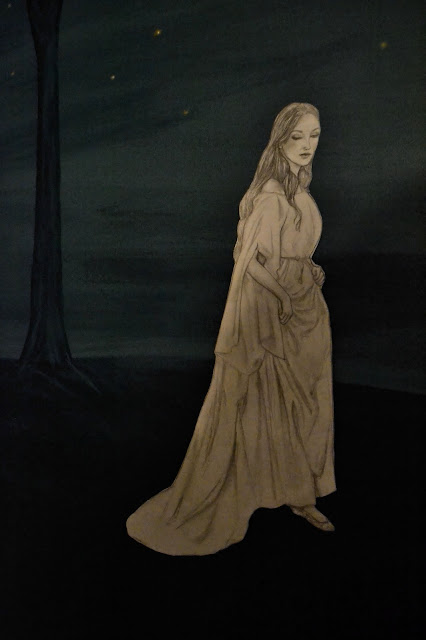 This also gives you a peek of how our dining room looks at night when the lights are low.  It really feels like being in a magic forest at midnight!

Of course it goes without saying that if I do end up completing phase 2, this princess will be in color, done in deep tones to match the forest around her as best I can.
Posted by Grace at 12:31 AM 4 comments:

So hi!  Happy 2013.  A week ago we finally put away the traces of Christmas, and I tried to embrace the opportunity to shift some stuff around at the cottage.  Here is a chance to catch you up on what's been happening...

Today was a beautiful sunny (if cold) winter day, so I snapped a shot of the dining room, de-snowflaked on the walls..  I couldn't help but leave up some of the snowflakes on the chandelier and the centerpiece bowl though.  Hey, snow is a winter thing too!  Note there are only four chairs around the table instead of six.... 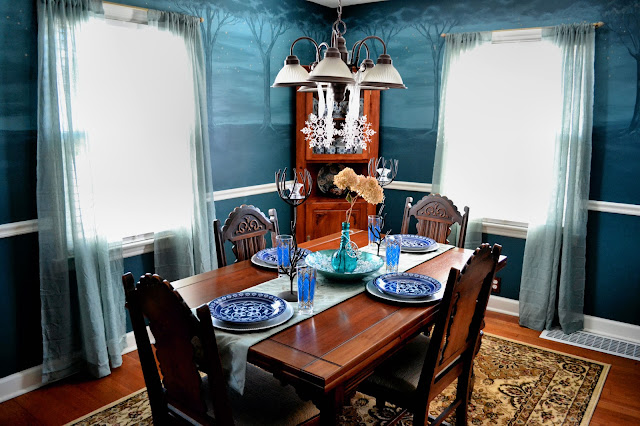 We moved the small table that normally sits in the bay window to the other side of the room for Christmas to make room for the tree...and discovered that the African Violet in the Wardian Case LOVES it there...we haven't had a bloom on the plant since we bought it a year and a half ago, and now look!  So now that table isn't going back.  We took down the tree and that left a big blank spot by the window... 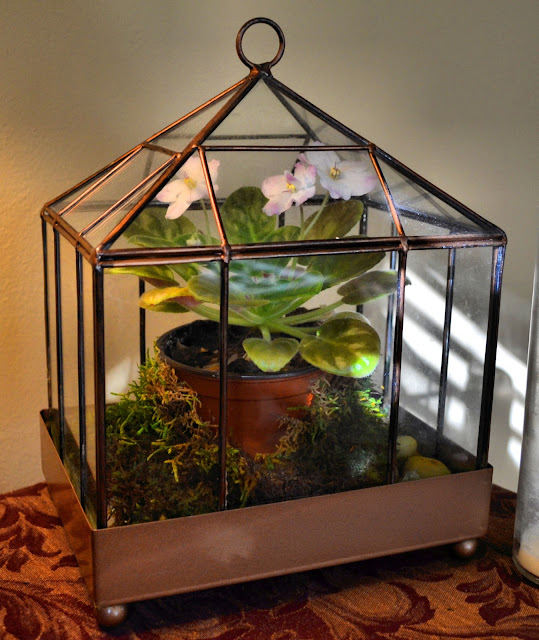 ...so instead we put two of the dining room chairs in the living room, with a table between them.  Not sure what we're going to put on this table yet...it's just a temporary arrangement till we find something perfect. 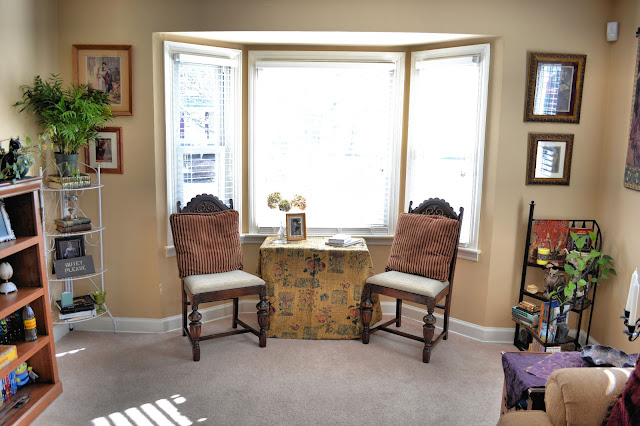 The fabric on the table is a gorgeous tapestry given to me by my friend Briony Keith.  Yes, it features trees! 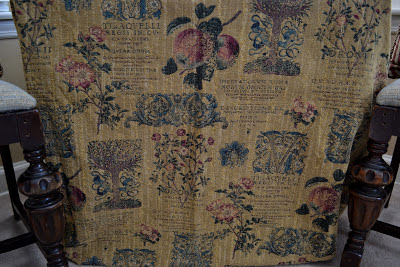 One thing I've never been thrilled about is the set of coasters we had in the living room.  I got them at a garage sale when I moved into my first apartment twelve years ago.  Well of course at my favorite antique and craft store again, I saw this set of really neat "mini-plates" as they call them.  Oh phshaw...they're coasters.  :P 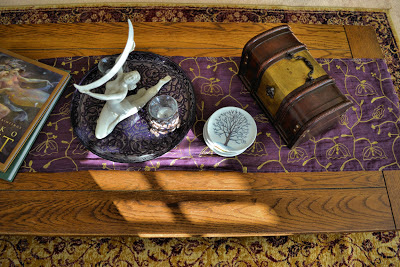 There's one for each of the four seasons, and I figure I can rotate out which one sits on top when its season arrives.  Tree coasters?  Can't imagine why that'd interest me....  ;) 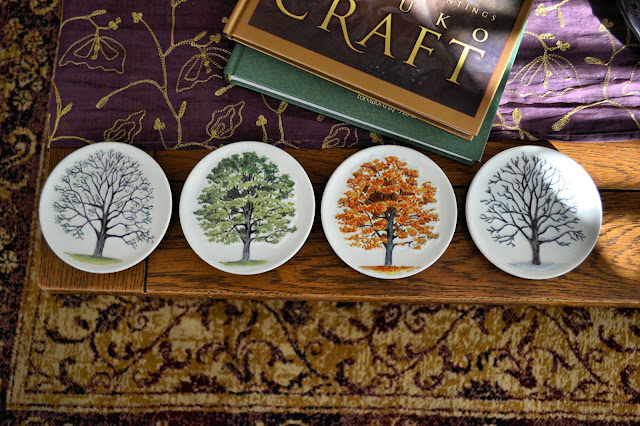 The mantle has been de-Christmassed, but I tried to keep a winter feel to it by arranging pine cones throughout the arrangement.  The faerie is holding a glittered winter leaf made from leather by my dear friends Shane and Leah Odom from Mythical Masks by Miscellaneous Oddiments.  I love the little touch of winter magic it adds. 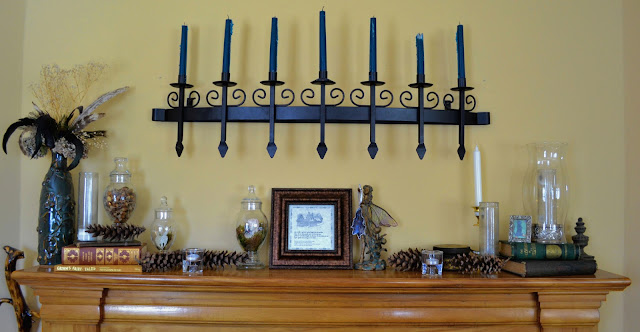 Aaaaand finally something I did today.  Something new in the below picture?  Why yes there is.... 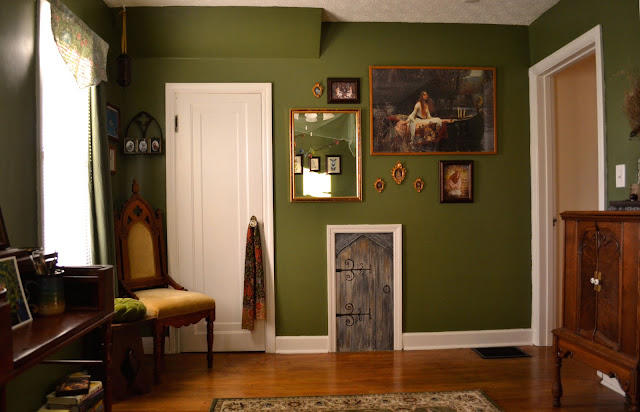 I finally did my Faerie door in the Dreaming Room this afternoon.  Originally I had planned to have ivy and greenery spill out from the trim around the door onto the wall a little, but I think I'm going to live with it like this for a little while.  The problem with doing Trompe-l'œil painting is that there's such a fine line between something creative and sweet and something that veers into kitsch.  I'm afraid adding the leaves/vine might swing it over into the kitsch category too much.  But we'll see.  What do you think? 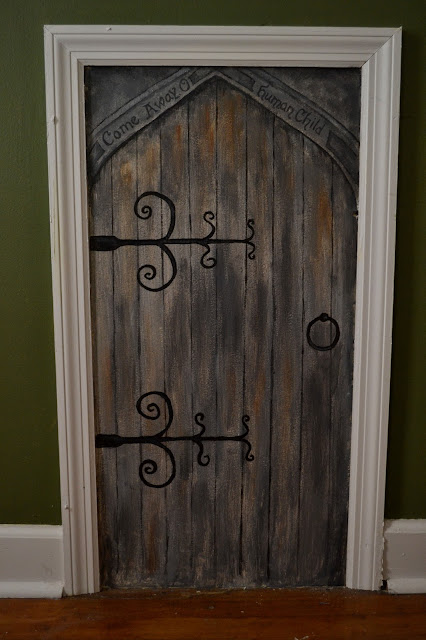 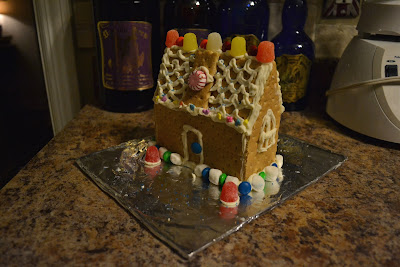 A little "gingerbread" house I made with a kit created by my friend Sheli.  Graham crackers are used for the walls.  Too fun. 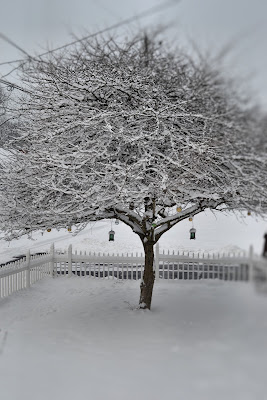 I know i take too many photos of my Hawthorn, but sometimes I just can't help it.  I mean, LOOK at it covered in snow like white hair, lanterns dangling like earrings.  Reminds me of a lovely family matriarch I know......... 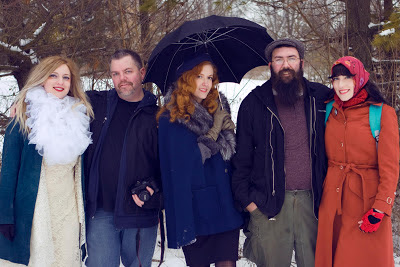 Today I was out in the snow again, shooting with photographer friends in the elements for the second time in the last week.  I love this picture...it makes me smile to think of the creative kindred minds in it!
Posted by Grace at 11:36 PM 2 comments: