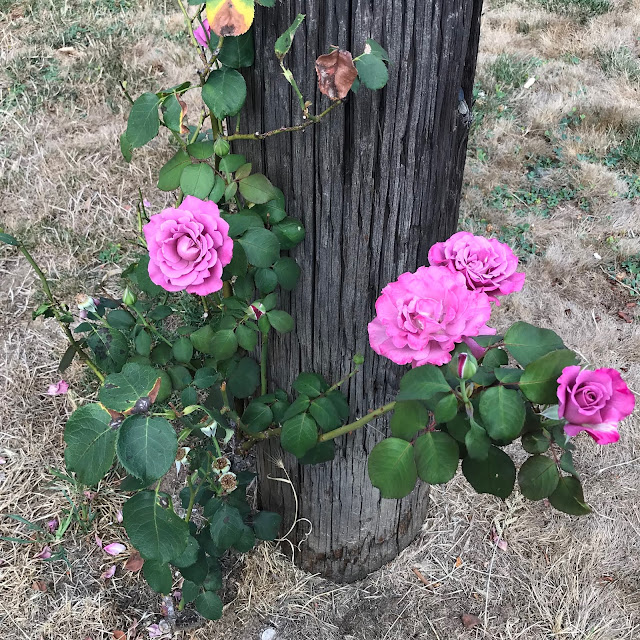 Oh Portland, city of my heart, in the state of my heart. Only in you will a random telephone pole on a random city corner have stunning roses twined around its base.

I don't know how I missed seeing this until our last morning of the trip, but there it is, right on our walk to Hawthorne.

For our last morning, we decided to eat at the Bread and Ink Cafe. I ate this same exact meal last trip, and it was eye-roll-back-into-head good, so why not repeat? 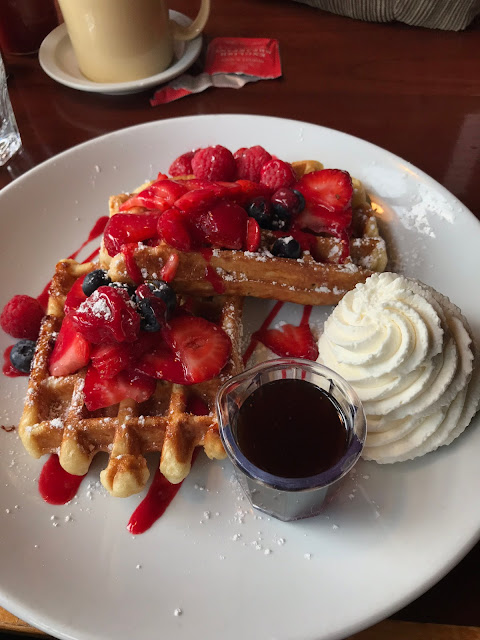 Three things happened at breakfast: first, I took a photo of my plate and sent it to the group chat with Shveta and Bryonie. Bryonie's instant response was "oh, you're at the Bread and Ink! I'm watering outside the Brae if you want to stop by!" Of course we did.

Second, when we were a few bites into our meals, people near the front door of the restaurant started running outside. From our seats near the window we saw people outside running too. My fight or flight kicked in and I worried that there was an active shooter outside or nearby. Come to find out, two guys had started fist fighting in the middle of busy Hawthorne! A few minutes later, police sped down the road and blocked off all traffic on Hawthorne. Wow. Dinner and a show.

Then, when we were halfway done eating, a really sweet woman came and sat across from us at our table. She told us we were both really beautiful and had mermaid hair. We thanked her and told her that people don't say things like that to each other often enough!

After breakfast, we walked down a few of the charming streets near Hawthorne, and I picked a bouquet of street flowers to press when I got home. 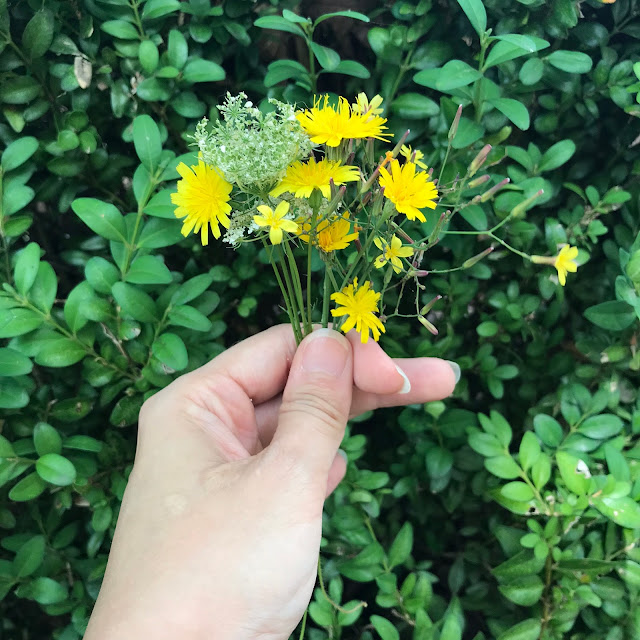 We arrived at the Brae and Bryonie was indeed watering. I asked her if I could take a smattering of flowers from the garden to also press, and she agreed. I left an offering to the Brae in thanks before leaving.

And then it was indeed time to go home. I was starting to feel quite poorly, so I stopped by a health store in the airport and bought some masks. If you want to have an empty row on the plane, wear a mask.

As another small touch of synchronicity, we ended up in the same row with the same people as our flight out to Portland on Monday. They remembered us and we had a good laugh. 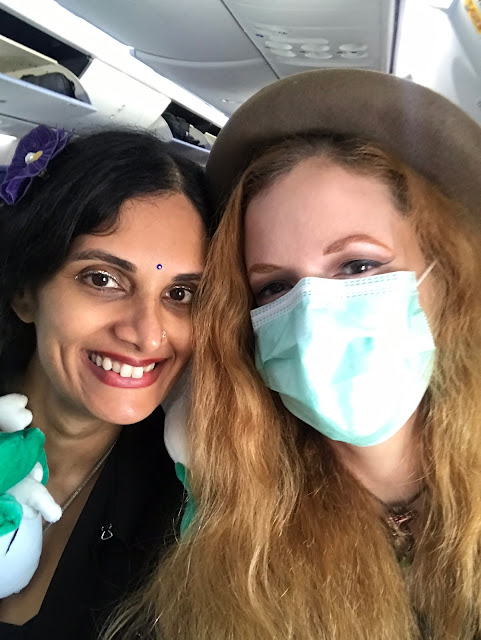 Unfortunately, the mask ended up being needed: I came down with bronchitis (that I'm still, as of now, fighting against) at the tail end of the trip. But I am SO thankful that if I had to get sick, it was on my way home, not before or during this incredible, magical trip to Portland.

A few photos of the souvenirs I picked up on the trip. This doesn't include the natural souvenirs, like rocks, pebbles, or pressed flowers.

First, the sweet little statue that I had seen in photos from the Brae. This is the one that they had no more of, but then Bryonie found one left behind a stack of pillows on the second to last day of our vacation! Portland magic. 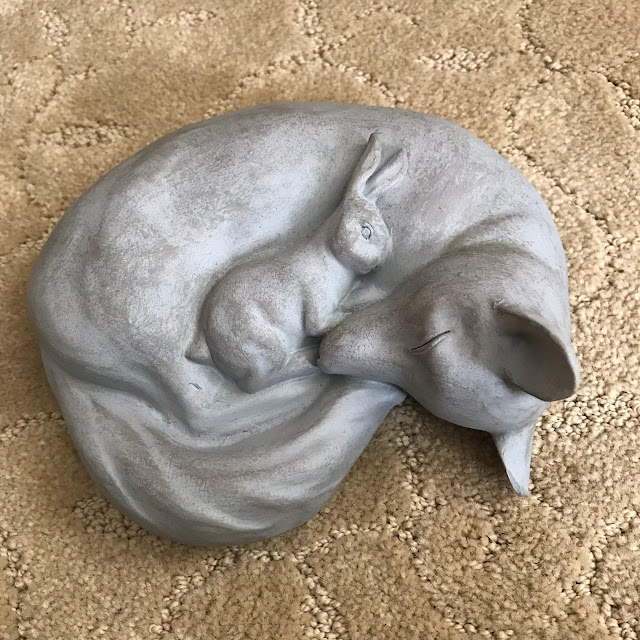 Two brand new Fernie Brae-branded Brian Froud art pillows. They screamed my name and I had to listen. 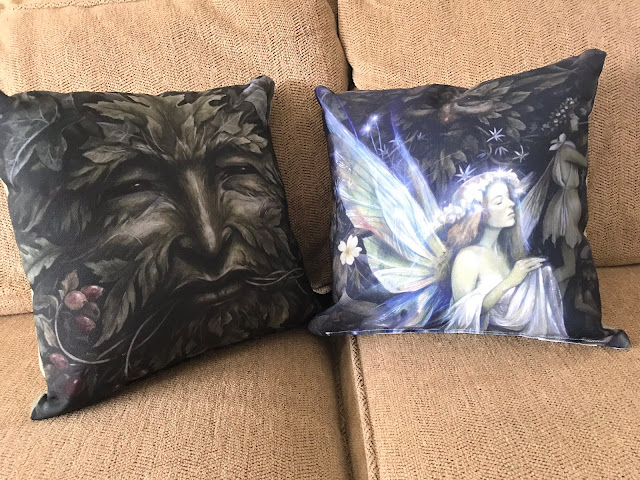 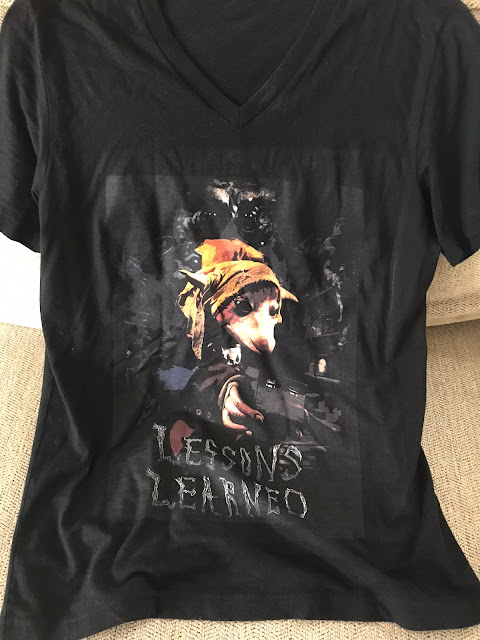 Thigh high grey and red striped fairy socks from Sock Dreams. Now that I've tried them on, I suspect I'm going to buy many more pairs. 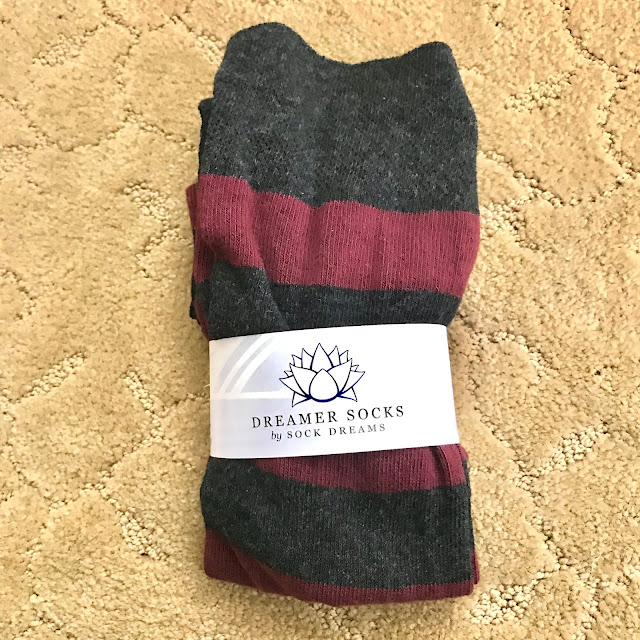 Two jars of Marionberry jam, procured on half off sale. 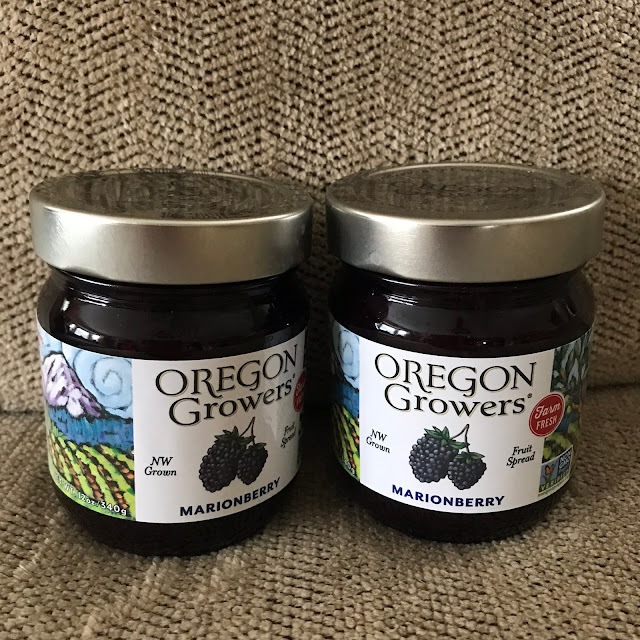 A Fernie Brae pin of the Love Token Troll by Brian Froud. He already makes me feel better to wear him on days I feel a little down. 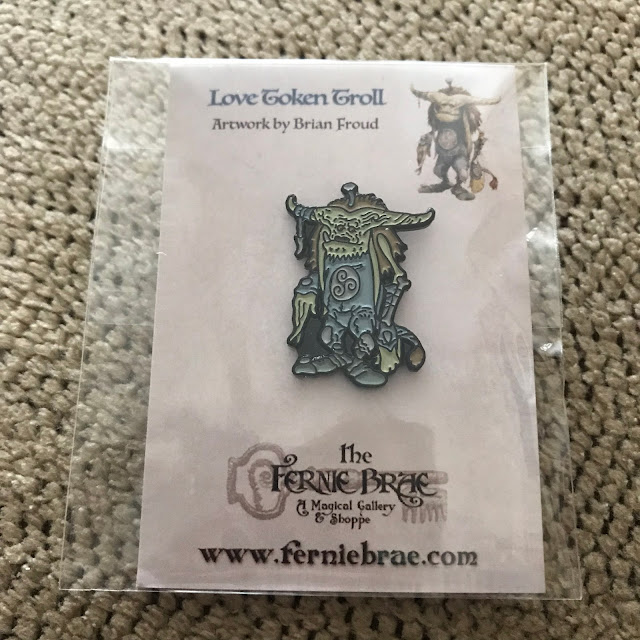 A tiny rose Shveta bought me at the Rose Garden as a reminder of my resolution to WRITE. 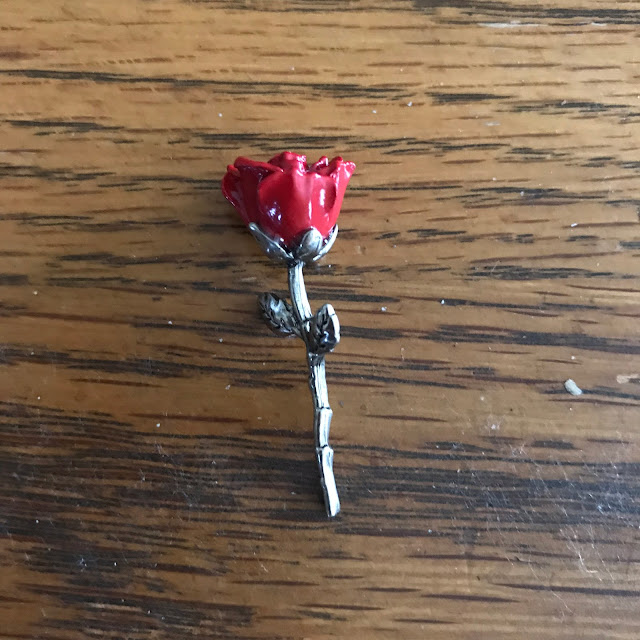 An amethyst shard. (It was in a bowl at the Brae labeled "Dark Crystal shards??" and how could I resist that) 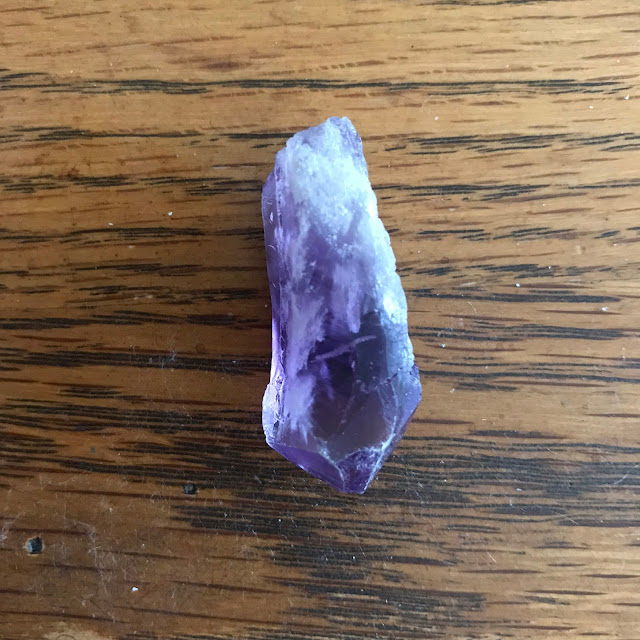 Fairy wing earrings from Helen Nevett of Under the Ivy. I love her work, but she's based out of England and shipping is expensive, so this was a great chance to get these. 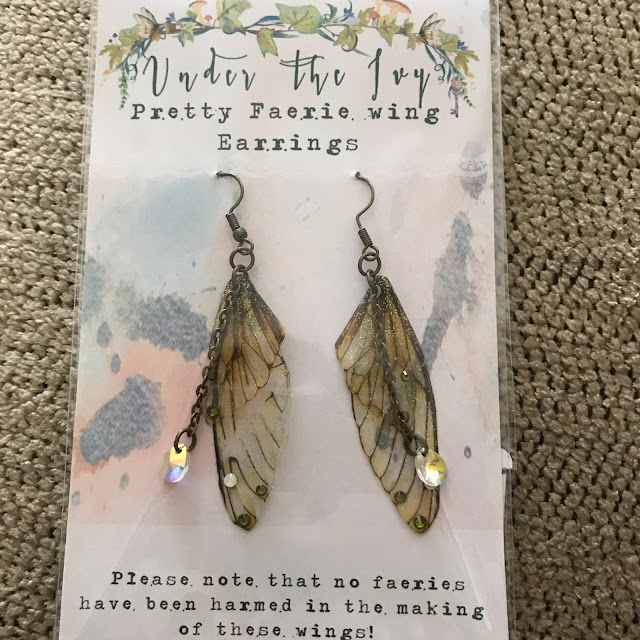 This is the postcard that Shveta and I both had to get at the Powell's store on our first day.
It.
Is.
Perfect. 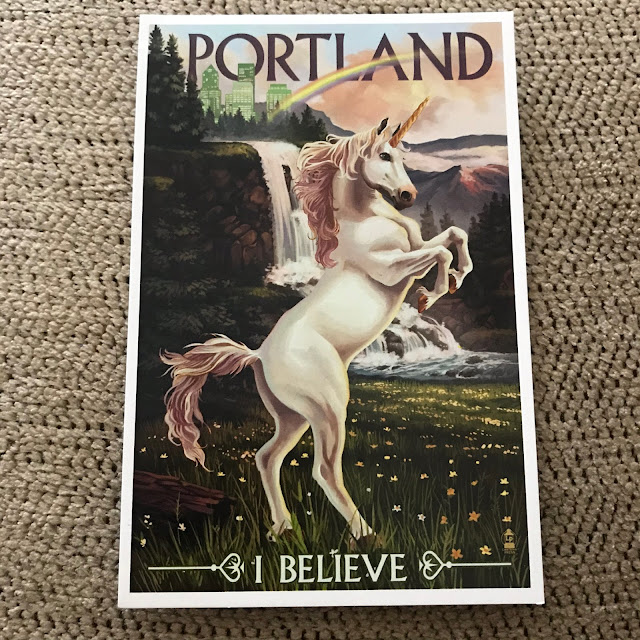 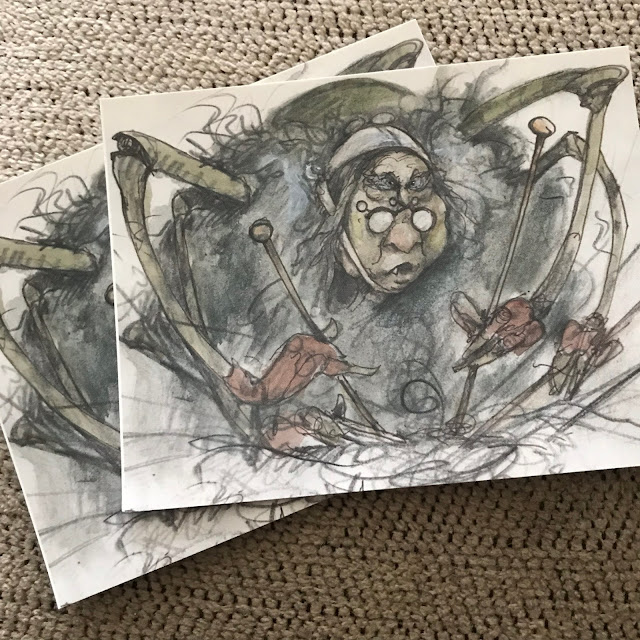 A Brian Froud card to frame. 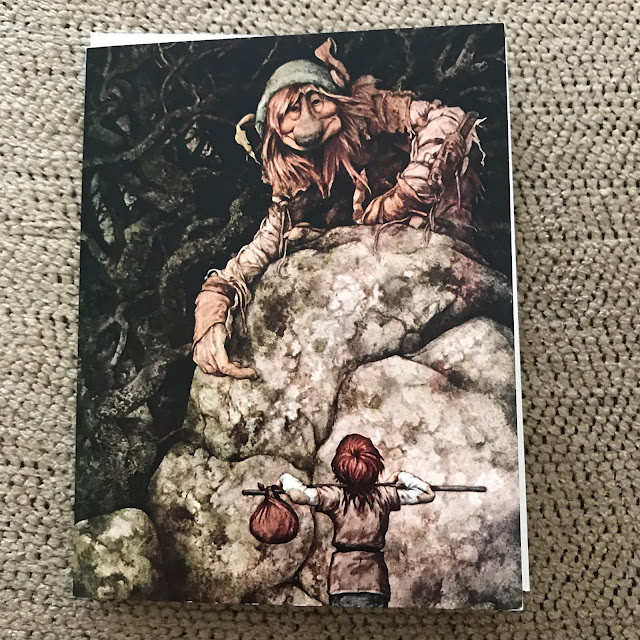 And one more Froud card to frame. 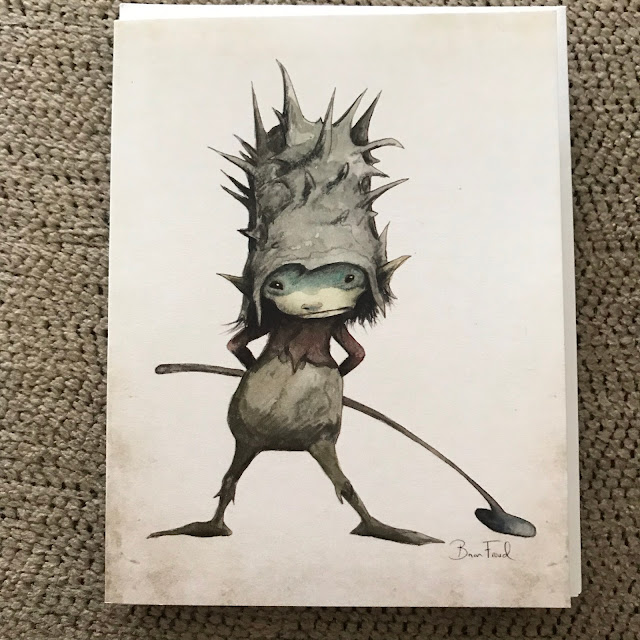 Once again, Portland, Oregon, thank you for your love. For making me feel alive with magic, and for inspiring me so very thoroughly. I will miss you until we meet again.
Posted by Grace at 1:15 PM